Updates to accommodate Wayne State, Northeast students given at Growing Together 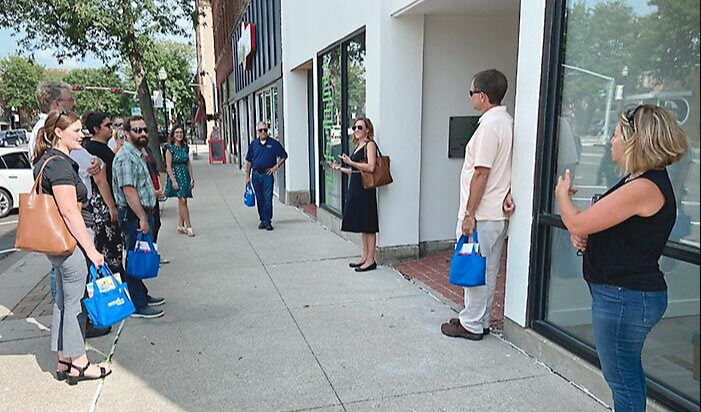 Some Wayne State College students will be visiting Norfolk next week to learn more about the city, including going on a scavenger hunt downtown.

Marysz Rames, president of Wayne State College, and Michael Keibler, executive director of co-op education and industry liaison, updated community leaders on their college’s students during a Growing Together meeting Wednesday at the Norfolk Area Chamber of Commerce.

Keibler said there would be 75 Wayne State students who will attend a social, then go around downtown on a scavenger hunt on Wednesday, Aug. 31. They also will meet at 5:30 p.m. at The Loft.

Wayne State also is working on the second round of housing for students who will live in Norfolk, Keibler said. A steering committee is overseeing those plans, he said.

In April, a groundbreaking ceremony took place for the first round of housing students from Wayne State. The students will live in downtown Norfolk their senior year as they perform two semesters of cooperative education with an employer. The first cohort of students will arrive in Norfolk in fall 2023.

Growing Together, an Aksarben workforce initiative, is aimed at keeping young people from Northeast Nebraska here, as well as attracting other young people.

The plan includes building off the downtown Norfolk riverfront redevelopment project that has begun. It also includes converting much of downtown Norfolk into a mixture of high-tech jobs with new living opportunities designed to appeal to young people.

There also would be tech workers, including students from Northeast Community College.

No word on grant yet

A big portion of the funding needed for a new innovative venture could be secured next month if Northeast Community College obtains a grant it is seeking.

Leah Barrett, president of Northeast Community College, said this week that there hasn’t been much new to report since members of the Northeast Board of Governors approved the potential purchase of a building in downtown Norfolk at 707 and 713 W. Norfolk Ave. earlier this month.

Barrett said the college is working with others to find a possible spot for the tenant of the building to move if it becomes necessary.

Northeast Community College is in partnership with the Nebraska Innovation Studio on the University of Nebraska’s Innovation campus in Lincoln, Invest Nebraska, area manufacturers and school districts to design a space that supports the further development of robotics and automation.

The purchase of the building is dependent on the outcome of a federal grant from the U.S. Economic Development Administration that would partially fund the renovations and equip the space.

Barrett said the college should know by the end of September if the grant is going to be awarded.

Funding also will come from dollars allocated to the State of Nebraska through the American Rescue Plan Act. The name of what the place would be called is unknown, but it would include such things as fabrication space and the opportunity for children to build robotics programming, Barrett said.

Angie Stenger, Growing Together executive director, also gave an update on Intersect Nebraska, which is located in downtown Norfolk, just east of the Daily News. “It is absolutely gorgeous,” Stenger said. “They have a little bit of everything.”

Intersect Nebraska offers a business environment for home workers, entrepreneurs and other creative types who might not work in the traditional business environment. It also is anticipated that it will be used by students in the Growing Together initiative.

The space could help with start-ups, people working from home or others who might want to drop in and use some of the space or resources.

The building is scheduled to open in early September as it is waiting on the city to give it occupancy, but it is usually open if people want to walk in and look around.