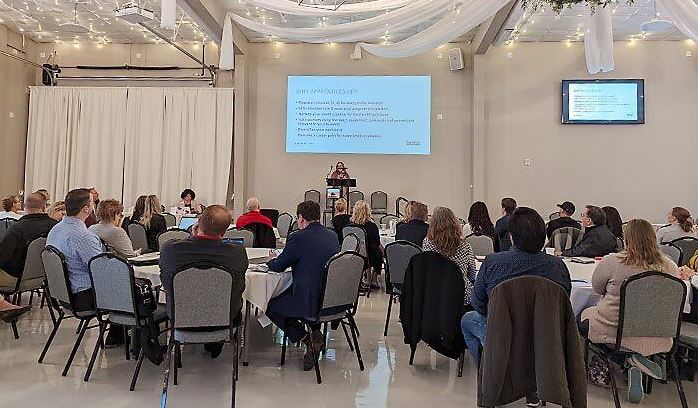 Around 80 employers and educators met at the Midtown Event Center on Tuesday to discuss the future of Aksarben's Growing Together initiative.

One of the major updates to the Growing Together initiative is new student housing.

According to Flood, some Wayne State College students will be required to live in new downtown Norfolk starting in 2023.

"The idea is that you have 75 college seniors earning their four-year degree, living in downtown Norfolk around each other and experiencing the community," Flood said, "and, at the same time, increaing the density in our downtown area."

According to Angie Stenger, Executive Director of Northeast Nebraska Growing Together, 75 students are a part of this WSC program. Around 45 of them are freshmen while 30 are sophomores at WSC.

The 30 sophomores will be the first group to live in the student housing when they enter their senior year in 2023. The rest of the 75 students will be added later on, Stenger said.

"The we'll have a new request for proposal go out because that's going to take care of 30 of them, but they will need 15 more places for the next year," Stenger said.

According to Stenger, students will not have to pay to live in the new housing. Both their housing and tuition costs will be covered thanks to a $24,000 scholarship from the Growing Together initiative.

"And they're gonna be making money because their internships are paid internships," Stenger said.

Stenger said the new housing would be located off of First Street and Braasch Avenue, with the groundbreaking ceremony happening next Wednesday.

The Geary family, the owners of DEG Enterprises and DACO Construction, will be building the new student housing. WSC will then rent the building from them, Stenger said.

Under the new Wayne State program, high school seniors who are interested in staying in Northeast Nebraska are recruited. Students then will be in the program throughout their entire four-year education at Wayne State College, where they will participate in career readiness opportunities.

Beginning their senior year, students then will be required to start a school-year-long paid apprenticeship with a local employer. During this time, students will work up to 30 hours per week in a hands-on learning environment.

"We are working hard at trying to find places and internships so that these students are convinced to stay here," Stenger said.