Redevelopment plan gets through third of five steps 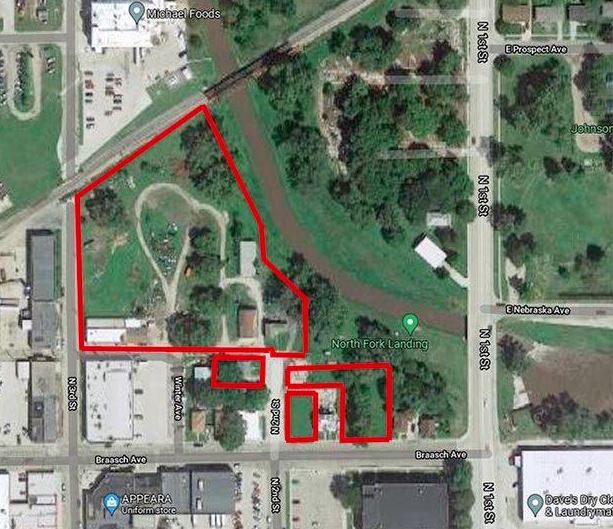 The area marked in the image is part of the Geary redevelopment project, which is north of Braasch Avenue and east of the North Third Street in downtown Norfolk.

The North Fork redevelopment project consisting of residential and commercial development downtown Norfolk continues to move through the process.

On Monday, the Community Development Agency approved it for the second time. The agency consists of Norfolk Mayor Josh Moenning and the Norfolk City Council.

Monday's meeting marked the third of a five-step process. Known as the Geary redevelopment project, the housing and commercial proposal includes constructing two apartment buildings to house Wayne State College students as part of the Growing Together Career Scholars Program.

It will next go to the Norfolk City Council on Monday, April 4. If approved, it then would go back to the Community Development Agency for the fifth and final consideration.

The proposal includes a commercial property as part of the first phase, with apartments on the second floor.

Dan and Connie Geary submitted a tax-increment financing (TIF) application for the redevelopment, which is northeast of the intersection of Braasch Avenue and North Third Street. It is bordered to the east mostly by the river.

With TIF, additional property tax revenue generated by development work is initially and temporarily used to help with the infrastructure costs of the development, thereby making the housing and commercial project more affordable.

After assistance for infrastructure costs is paid for, the higher property tax revenue goes to the governmental entities that normally receive it.

The area consists of about 4.5 acres they wish to redevelop. The project is zoned a mix of I-1, C-1, and R-3. The Gearys intend to re-plat the property and rezone it as C-2 with a mixed use overlay.

The project will require significant infrastructure improvements and other public improvements. These improvements will include public access, traffic flow, street layouts and street grading.

It will also include sidewalks providing for pedestrian access to the area and also moving the existing unused railroad bridge spanning the North Fork of the Elkhorn River downstream to provide a pedestrian connection to existing trails and Johnson Park.

There also will be extended water and sewer systems, communication lines, gas, electrical and other essential utilities and infrastructure to provide the service to the area. Filling and grading work also will be needed.

The total estimated cost of the redevelopment project is $24,712,736. The plan provides for up to $4.8 million of TIF, with TIF expenses estimated to be about $3.2 million. The project is not economically feasible without TIF, according to the plan.

The project is expected to comprise three phases, with the first phase beginning this spring. A total of five condominiums and 39 apartment unites are planned. There also are about 18 commercial units planned for construction, along with the rehabilitation of an existing commercial building.

Other improvements call for landscaping with greenspace, lighting, street furniture and a fire pit.

Students from Wayne State College will live in much of the housing through Aksarben's "Growing Together" initiative. That plan is designed to increase the number of young people coming and staying in Norfolk, as well as increasing the annual wages among workers.

Growing Together includes a cooperative education scholarship program with a partnership between Wayne State College, the Aksarben Foundation, the City of Norfolk and the business community.