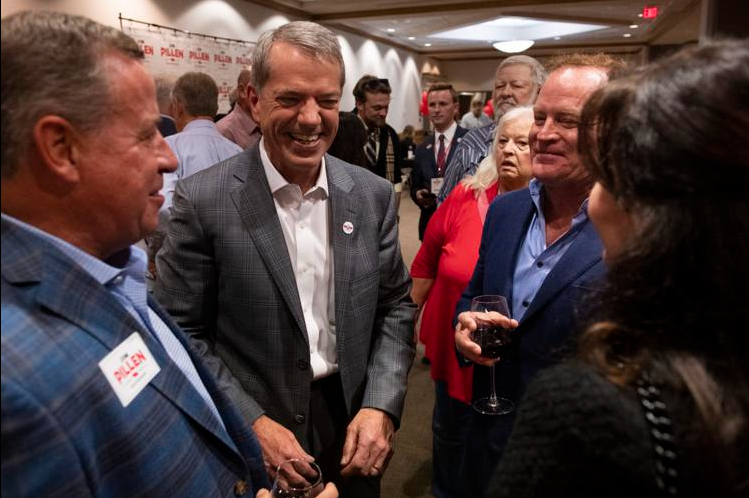 Jim Pillen, a conservative Republican who has proposed education funding reform along with an aggressive workforce development policy designed to keep young Nebraskans in the state, was elected Tuesday as Nebraska's 41st governor.

The University of Nebraska regent sailed to victory over Sen. Carol Blood of Bellevue, the underfunded Democratic nominee, to chalk up the seventh straight Republican gubernatorial victory in Nebraska.

Pillen's path to victory took him through a multi-candidate Republican primary battle in May that centered on an expensive showdown with Falls City agribusinessman Charles Herbster, who had the support of former President Donald Trump.

Trump came to Nebraska in the fading days of the campaign to urge his supporters to vote for Herbster, who had been an agricultural adviser during Trump's presidency.
Blood led in early vote tabulations from eastern Nebraska on Tuesday, but Pillen gradually gained steam as the vote count moved west into heavily Republican territory. He won with 60% of the vote.

Flanked by his grandchildren and at-times emotional, Pillen addressed supporters Tuesday evening, saying the way he ran his campaign for governor has prepared him to lead the state.

"That is what has equipped me to be the governor of the great state of Nebraska, and together we can have a great impact on this state," Pillen said, noting the energy in the room filled with supporters at The Cornhusker Marriott in downtown Lincoln.

Pillen has proposed a restructure of Nebraska's formula for state aid to K-12 schools in order to distribute assistance that is now denied to many rural schools, along with a plan to provide targeted education options at community colleges designed to rapidly prepare young Nebraskans to enter the workforce, which currently counts tens of thousands of unfilled job opportunities.

"Keep our kids here" has been an overriding campaign theme.

Pillen's proposal to revise a state school aid formula that now takes into account a number of demographic factors designed to assess needs, including urban characteristics such as the concentration of students living in poverty, could trigger a major legislative battle depending on how it may eventually be framed.

Nebraska's new governor, who will succeed Gov. Pete Ricketts in early January, is founder and owner of Pillen Family Farms, a large pork production enterprise that is headquartered in Columbus and has more than 1,100 employees.

Blood, who is completing her second term in the Legislature, came to the race with a detailed plan of workforce development, along with a range of policies to strengthen the rural economy, but lost an opportunity to share the political spotlight and gain more media attention when Pillen declined to engage her in debates.

"I know it's David and Goliath now," she said in the fading days of the campaign.

Democrats haven't won a gubernatorial contest since Ben Nelson was reelected in 1994.