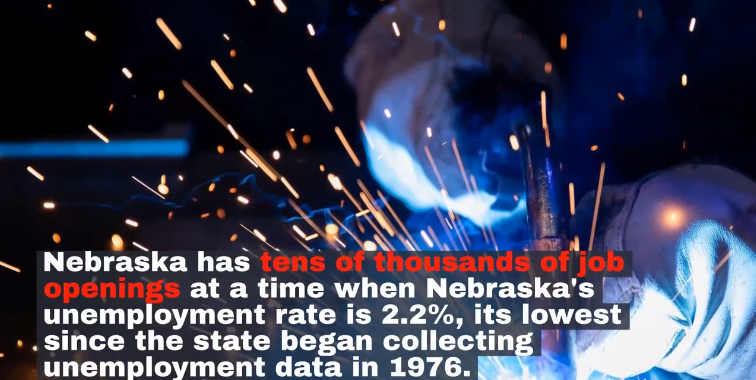 That’s how Joni Wheeler describes the creation of Ignite Nebraska.

Launched in February in Omaha, the workforce development apprenticeship program is the culmination of Blue Cross Blue Shield of Nebraska executives’ desire to solve a multifaceted problem: a shortage of technology employees. Their solution: give economically disadvantaged people of color the training needed for those middle-class careers.

Jay Warren-Teamer, Blue Cross’ director of diversity and inclusion, said organization leadership set out to find suitable candidates. They reached out to various local and state entities to find people seeking career advancement who also qualify for government assistance programs.
What came about was the first group of four adult students — three of whom are Black — who graduated from the program in October. A second group of five students started in September.

The training comes at no cost to the students. Blue Cross has partnered with Bellevue University for the university to develop and carry out the training curriculum. Blue Cross also works with other community agencies to help Ignite students overcome issues such as transportation challenges.

“It’s been one of the most collaborative and innovative approaches to really working with a corporation to develop curriculum that allows them to actually hire the students right away knowing that they both had the trial by fire in the university and trial by fire in the workplace and succeeded on both ends,” she said.

At the start of the program, the initial group of students started making wages of $21 per hour and worked 20 hours per week for Blue Cross. Wheeler said that wage and schedule structure gave the students a decent wage while allowing them to continue to be enrolled in government assistance programs.

As the students acquired more skills over time, their wages and hours also increased. At the end of the apprenticeship, Blue Cross offered them positions that pay between $50,000 and $60,000 per year. All four students accepted.

Rama Kolli, the organization’s chief information officer, said the employees are meeting, and in some cases exceeding, expectations. He added that the employees are skilled at creating data and presenting it through easy-to-understand visuals such as graphs.

“They can get creative in telling a story,” he said, “so it naturally fits into the day-to-day skills of any person.”

With the second group of five students now going through the program, the Blue Cross executives said they have a vision of expanding Ignite Nebraska to other Nebraska cities including Lincoln, Kearney and Columbus. Wheeler said Blue Cross also will continue to recruit within Omaha, particularly North Omaha and South Omaha.

Blue Cross also plans to partner with five to seven more companies next year. The companies could sponsor cohorts that could collectively enroll as many as 30 people in the Ignite Nebraska program by next March.

“We have untapped talent across the community,” Wheeler said.