i3 Bank represents expansion for institution founded in 1928 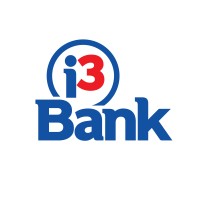 Midlands Business Journal, September 17, 2021 - Many are familiar with i3 Bank, they just may not realize it at first blush. That's because the organization featured recently on Husker Football radio spots and on digital billboards has been around since the Great Depression era -- only that rare-breed, fifth-generation family bank operated under a different brand over the preceding 90-plus years: Bank of Bennington.

"We're growing dramatically," said CEO Leslie Andersen. "We have entered new markets. So we're not only in Bennington and Omaha. But we're also in Ashland and Lincoln, and we bought an insurance agency. We had all these different brands. It was an effort to bring them under one brand that represented who we are." The bank started by Andersen's great-grandfather and grandfather, Charles F. Roe and Harold E. Roe, and whose Bennington branch is based out of 12212 N. 156th St., turned to another longstanding local firm, Smith Kroeger, for assistance in its new brand development and launch.

"They did an amazing job through the process," Andersen said. "They spent time with our employees and other stakeholders. We had the same name for 94 years. We wanted to focus on our core values of innovation, integrity, and impact. It took us a long time. We worked on [the brand] for 24 months. We wanted to be sure that we had heard the voice of all of the stakeholders involved."

The aforementioned values -- integrity, innovation and impact -- are conveyed in the name of i3 (or cubed).

"The employees are really excited about it," Andersen said. "It was important to have them involved in the beginning. We spent a lot of time talking about our core values, and living them. It gives them the opportunity to, when someone asks them, 'What does i3 mean?' they can tell them."

She further explained that "innovation" isn't just about the technology piece.

"It's tailoring products to meet customers' needs," she said, a reference to how they're not trying to fit customers to cookie-cutter solutions. "Impact is the impact we have on communities and the folks that we work with."

Anecdotally, a pandemic-related story may very well demonstrate its integrity and its impact; Andersen recalled: "During COVID, we kept all of our employees. That's who we are. We had to divide people up for social distancing reasons. And then the only tellers who were busy working were the ones running the drive-through, because our lobbies were closed."

So, i3 Bank ended up deploying these people who were well-versed in working with customers to touch base with customers, starting with seniors. Thousands of phone calls were made. "We helped a number of people," she said. "We ran into one elderly gentleman who didn't have a computer or a smartphone. He was trying to figure out how to get groceries, and his kids didn't live in town."

They contacted a manager with Hy-Vee, who arranged to have groceries delivered to the customer's home. "We did help people learn how to do their online shopping or how to use their iPads," Andersen said. "We got a lot of responses from the children of those people who live in other parts of the country, thanking us, and saying it was a really nice thing to do because their social lives got cut off. But it's just who we are."

It is an identity honed during the darkest of days. A mix of organizational and family lore, Andersen took us back to 1928, when the Bank of Bennington was founded, just a year away from the Great Crash and only 10 years removed from the horrors of World War I. The Roes began giving people cash to buy groceries during the bank holiday, when President Franklin D. Roosevelt shut down the entire U.S. banking system in an effort to stem bank failures and restore confidence in the financial system during the Great Depression.

In this manner, their neighbors were able to get their money while the banks were closed. The community responded in kind; in order to reopen, banks had to get the blessing of their depositors.

"They voted to leave their money in the bank," Andersen said. "That was the only way to open up after the bank holiday. Because of that relationship that we had in the community, we were able to (re)open."

It is a relationship that was sustained as Harold Roe's son, Andersen's father, Jerry E. Roe, because president in 1971. Andersen would work with her father for 25 years. She, too, was named president in 1994.

"He was good about turning things over to me and not judging or second-guessing." she said. Moreover, Andersen indicated that her father respected her unique perspective, which included 10 years of experience outside of the state with very large financial institutions.

"I was able to bring things to the bank that we weren't able to do before," she said.

"It was really a matter of reflecting who we are," she said. "We are one big family. But, when you're in Lincoln and the name is 'Bank of Bennington,' it doesn't quite feel right."

She also indicated that the name doesn't resonate when one is in communities outside of the immediate area, including Lincoln.

"We are growing really rapidly in all of our markets," Andersen added. "We work together as one team. We don't focus on, 'Lincoln did this.'"

She also noted that, prior to the pandemic, they shared talent across markets; however, the services and challenges that arose from COVID-19 only reinforced this notion.

"We helped a lot of people through [the Paycheck Protection Program]," Andersen recalled. "That was a definite team effort to make that happen."

She noted they assisted some individuals who were not even i3 Bank customers.

Other initiatives referenced by Andersen include considerable succession planning and trying to backfill positions as team members get older. Now boasting employees across four branches, the organization's size is a far cry from the three leaders who started the bank (which included Andersen's great-grand uncle).

"There aren't a tone of [family banks] that are on the fourth or fifth generation," Andersen said, noting that her children and nieces have also worked in the bank during college and high school. "I think that family banks are so invested in the communities that they serve, that's where they live, that's their priority - the priority isn't a return on stock."