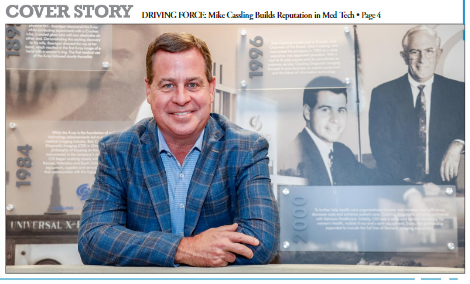 "Customer service is ultra-critical to us because patients' lives are on the table." - Mike Cassling, CEO of Cassling & CQuence Health Group It's hard to pick one industry most affected by the events of the past two years, but health care comes mighty close, with the pandemic stretching human endurance and physical resources to their limits.

One might think it's a very bad time to be in the health care business, but that's not the attitude of Mike Cassling, CEO of both longtime family businesses Cassling and CQuence Health Group. For Cassling, there's always a better way around, over or through challenging times for those willing to find them.

"I'm very anti-complacency. I try to make sure that's never in the picture," he said. "I've always believed from an early age if you're not moving forward, if you're not growing, you're going to die. You won't survive, personally or professionally."

"If you get complacent in business, the market is going to continue to change and you're going to become irrelevant."

Cassling's relentless drive to improve, build and lead was honed by his father, the late H. Robert "Bob" Cassling who founded the family firm, Cassling Diagnostic Imaging, in 1984. Over the next 12 years, he built a stellar reputation in the medical technology field before turning the reins over to son Mike in 1996.

Since that time, the pace of change has accelerated substantially in all areas. Except, that is, regarding the company's core philosophies.

"Customer service is ultra-critical to us because patients' lives are on the table," he said. "We have a big service business and we always say, 'Fix this like your grandmother or your mother is going to be the next patient walking in that door,' because they could be. Our employees take that very seriously and it's reflected in our commitment to get out to fix equipment as fast as possible and make sure we fix it the first time."

Cassling, who was named a Midlands Business Journal 40 Under 40 in 2002, ushered in a new chapter of the company's history with the creation of CQuence, a holding company and shared services business in 2011. CQuence provides a number of benefits to member companies, from capital investment to strategic guidance and operational support. He sees the experience of leading a multi-faceted business as a master class in leadership.

"The biggest thing that I've learned over the years is patience; sitting back and making sure you understand all sides of a situation or problem," he said. "I know in the past it was more of here's a situation or a problem and I'd just pull out the gun and shoot. I've continued to grow and evolve not only in leadership, but my knowledge of the health care industry to stay at the forefront of what's going on and grow the business."

To do that, Cassling has also had to learn the art of hiring the correct people and delegating tasks to them accordingly. While those lessons were not always easy, today they are the underpinning to his success, he said.

"I think it's a struggle for anybody, the giving up and letting go and hoping somebody does it as well as you think you do," he said. "I was a control freak back then like everybody else. But there's no way you can grow and be successful trying to do it all."

"In any business it all comes down to the people, finding those great leaders and making sure they have the tools and education to be able to do what you need them to. I've always been one who, if I find an A player, I will hire them even if there's no position. A lot of my leaders now were just obvious rock stars and we found a home for them.

"In fact, I hired my company president over at Cassling saying, 'Hey, I don't have a real job for you, but just come on board.' We provided him training and opportunity and he just climbed the ladder from there. You bet on the jockey, not the horse."

The young go-getter Cassling hired, Kyle Salem, came aboard 18 years ago. Now company president, he said he's learned much from his boss in the years since, improving him as a professional and facilitating his rise through the ranks of the company.

Doing the right thing has also bled over into Cassling's long list of community service endeavors, including for the Nebraska Tech Collaborative and American Heart Association. It's a passion he credits his mother for in her own exampled of giving back to others.

"My mom was big on giving back and giving to the community," he said. "I'm pretty sure that was in my DNA and I love doing that. I'm fortunate now just because I have so many great leaders that run the business day to day, I can spend more time helping others."

"The first organization that I got involved with was the Salvation Army; I've been involved there for about 30 years now locally. I love how hard the officers and others work and how they take care of a lot of the people that nobody else wants to take care of, to truly get them up off their feet and back as good people within the communities. In addition to the local organization, I'm currently chairman of the national Salvation Army board as well and that's been fun."

"Another one I've been passionate about is in the area of the arts. Both my kids were in the performing arts. We've done a lot with Omaha Performing Arts with the Holland Performing Arts Center and the Orpheum. That's been great."

Even as his company deals with ever-expanding levels of technology, the company's continued success lies in very fundamental concepts. Stock the cupboard with talent, it goes, then root it in the fertile soil of customer service and genuine caring at the point of sale and in every interaction afterward.

"Mike is really a true visionary," Salem said. "Mike's vision is ultimately focused on doing what's best for the community, the patients, the industry. It's never what's necessarily best just for Mike or just for his business. It's always got an 'others' look to it."

This core operating philosophy may be old - as old as the firm itself - yet it's still relevant enough to position the business for the tidal opportunity that lies ahead, Cassling said.

"Telehealth, telemedicine in all its forms has rapidly advanced," he said. "It's been around for a while and it continued to get better as technology got there, but adoption was clearly slow. [COVID] has just accelerated that."

"Think about it from a service standpoint. Sitting in Omaha, we've got great health care but that's not true across the country where there's a huge issue of access. People may have access to a doctor, but they don't have access to the right doctor given what their disease state is. So, telehealth, I think, will change to the positive how we deliver health care for all. I think it will drive more access to higher quality care for everybody."