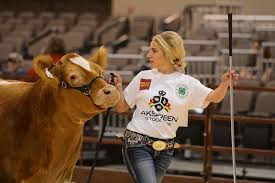 Grand Island, Neb. (May 11, 2018) – The Aksarben Stock Show will now be managed by the Nebraska State Fair, as part of a new partnership between these "two power-house organizations", says Foundation President, Sandra Reding.

The Aksarben Foundation announced the move Friday at the May meeting of the Nebraska State Fair Board of Directors. Greg Harder of Shorewood, Minnesota, was named the new stock show director. Harder and his staff will work out of the Nebraska Building at Fonner Park in Grand Island. In 2017, the Grand Island Livestock Complex Authority was instrumental in bringing the stock show to Fonner Park from Omaha.

Last year, the show brought 4-H participants from 10 states to compete in various beef, sheep, hog, dairy, goat and poultry events. It also hosted the National 4-H Livestock Quiz Bowl at the Bosselman Conference Center at the Heartland Events Center. As many as 5,000 people attended the stock show. There were more than 1,000 head of livestock, including about 600 head of cattle, along with hogs, sheep, goats and poultry. The Aksarben Stock Show was located in Omaha for 89 years before moving to Fonner Park. During that time, it became the largest 4-H stock show in the nation.

One reason behind the decision to move the show to Grand Island was that Aksarben officials felt that the livestock facilities at Fonner Park were a better fit for the event and would allow it to grow. The Fonner Park facilities include almost 500,000 square feet of state-of-the-art exhibition, livestock and equine facilities constructed initially for the Nebraska State Fair, but used throughout the year. The State Fair came to Grand Island from Lincoln in 2010.

This year’s Aksarben Stock Show will run from Sept. 28 to 30. The Aksarben Horse Show will be Sept. 22 to 23. Lori Cox, executive director of the State Fair, said having the stock show at Fonner Park will be beneficial for both the fair and the stock show. “This is an amazing opportunity between two very strong entities in this state that will help us to prosper into the future,” she said. Cox said that Harder will be in charge of organizing and running the show but that the State Fair Board will oversee the financial side and event operations. Before coming to Nebraska, Harder managed livestock programs for the Minnesota State Fair. Harder said he is excited about coming to Nebraska and managing the stock show.

“I showed at Aksarben in my youth and understand its legacy,” Harder said. “It has been known as one of the best stock shows in the country. With the quality of facilities and people in Grand Island, the future is just so bright for this show.” Knights of Aksarben is a nonprofit foundation that gives needs-based scholarships to youth throughout the heartland. Awarding almost $1 million annually, the organization raised $267,000 for scholarships at the 2017 stock show.