Aksarben 2018 Citizens of the Year:
Mogens and Cindy Bay 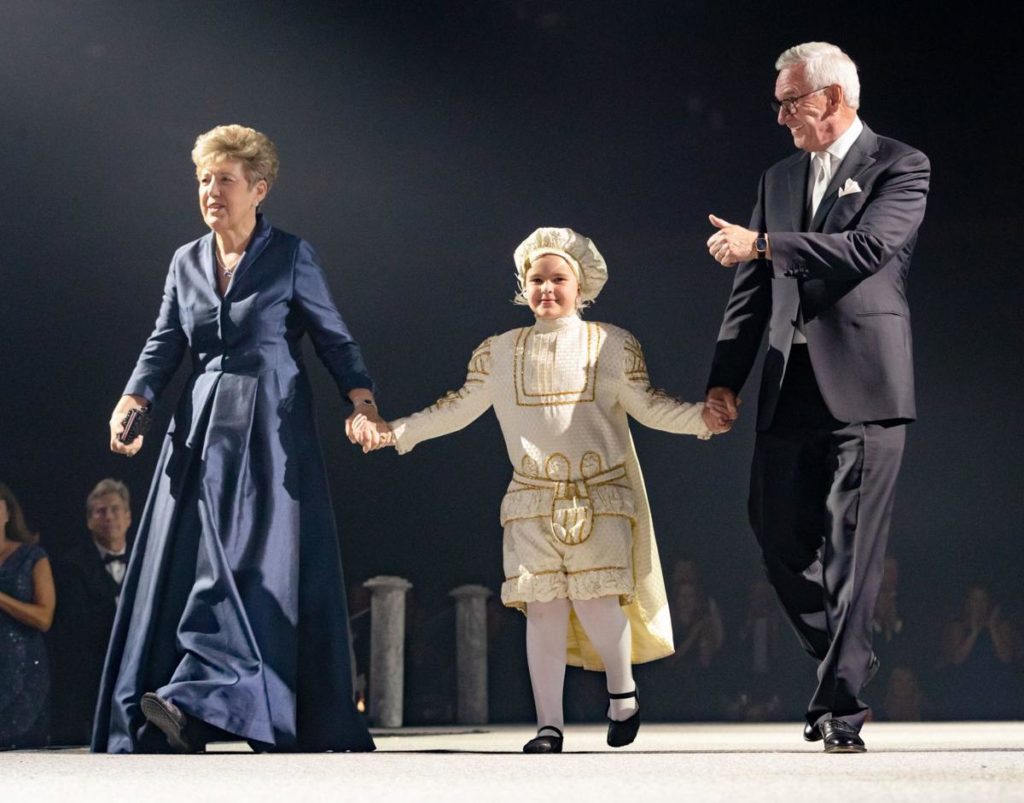 Mogens and Cindy Bay made history Saturday night at the Aksarben Ball when they were named Citizens of the Year, the first to be given the honor since Aksarben shifted away from a long-standing tradition of having a king and queen in the royal court.

The Bays embraced the change, among several for the organization.

“I think it’s of big importance,” Mogens Bay said of the shift from a more dated concept of crowning an accomplished businessman and civic leader as king and a college-age woman as queen, for her family’s role in the community.

“It allows Aksarben to recognize women in their own right,” he said. “So many women have their own accomplishments.”

About 1,500 people at the ball helped usher in the new era for Aksarben with a royal dinner and ceremony. The ball, in its 122nd year, is an annual fundraiser for the Aksarben Foundation, which provides scholarships for students and grants for Nebraska communities and also encourages volunteering and philanthropy.

The evening still included the traditional pomp and pageantry with processions of princesses, escorts and pages, all part of the mythical kingdom of Quivira. But notably gone were the king and queen, replaced by the new Citizens of the Year.

The night included live performances by the Omaha Conservatory of Music, the University of Nebraska at Omaha and a high school ensemble.

View Images of the Ball on Omaha World Herald

Mogens Bay is executive chairman of Valmont Industries and its recently retired CEO. His wife is a former teacher. Together, and separately, they’ve helped advise and raise money for numerous nonprofit organizations.

The 2018 ball, at the CHI Health Center, had a theme of “Glorious Past — Vibrant Future,” a nod to its 122-year-old history and the organization’s commitment to community betterment and volunteerism — but also to recent adaptations geared to changing times and needs.

The Aksarben Foundation has a long history of supporting education and offering scholarships to thousands of young people, but a new push is focused on workforce development in the state.

Younger leadership is also part of the updated Aksarben organization, helping to steer the organization on a fresh path, Mogens Bay said.

“Hopefully it’s the beginning of a new track that is in balance with our times,” the co-citizen of the year said.

The ball reflected the mix of old and new for Aksarben. Christie Oberto, who led the Women’s Ball Committee, said that while time-honored traditions were front and center at Saturday’s ball, they were showcased in a new format using new technology, including images from the ball’s history that were displayed on a 20-by-60-foot video wall.

The Bays themselves embody Aksarben’s old-and-new focus with years of community service, deep ties to the organization and a commitment to progress for Nebraska and Omaha.

The World-Herald named him Midlander of the Year in 2017.

Their accomplishments as a couple include chairing the 1999 United Way Campaign, the 2005-06 United Way Tocqueville Society Campaign and in 2006 being named as the charity’s citizens of the year; serving on an advisory board for Completely Kids; and advocating in numerous ways for Boys Town, the Henry Doorly Zoo & Aquarium, Lauritzen Gardens and Opera Omaha.

Mogens Bay has been an Aksarben governor; their daughter, Sarah Yale of Omaha, a former queen; and their three grandsons all pages, including 7-year-old Alexander, a page at this year’s ball. He met his grandparents onstage as they were honored.

The couple received a standing ovation Saturday after they were announced as the Citizens of the Year.

The 2018 Court of Honor recipients also were announced Saturday:

Thomas and Aileen Warren were inducted in the community service category. Thomas Warren is a former Omaha police chief and is currently the president/CEO of the Urban League of Omaha. Aileen Warren is the assistant vice chancellor/executive director of human resources at the University of Nebraska Medical Center.

James D. Pillen was inducted in the agriculture category. Pillen is president of Pillen Family Farms and managing partner of DNA Genetics. He is also a member of the University of Nebraska Board of Regents.